An iPhone User & The Note 8

A year ago, I bought my first non-Apple product in over a decade – the Microsoft Surface Book. In doing so, I journaled what it was like for an Apple guy to toy around with a Windows machine. It was a fun exercise… And to this day, I still have a real soft spot for my Surface Book.

That experience got me wondering about the other side of the isle in the mobile world. I’ve had just about every iPhone since the first and haven’t truly handled an Android device in years – my only experience being a borrowed unit that failed to impress me in any regard during the long weekend in which I had it.

Lately, however, Apple has started to piss me off. As someone that has worked in the creative industry for 20 years, Apple has always represented a tool built for creators to me. They were never appliances. They were (in my eyes) passionately envisioned scalpels sharpened just enough to make my job easier and more enjoyable. Something in the past few years has changed my perception of them and I’m not exactly sure what it is… But I no longer perceive Apple as a company that makes tools for creators. Instead, they make really nice appliances that come with just as many compromises as other appliances available in the market.

It started with the USB-C only MacBook Pro released last year and was amplified by the iPhone 7 sans headphone jack released just a little later. Both products left me cold and I don’t really know if there is any logical explanation for it… My iPhone 7 has served me fine I guess, but I sure wish it had a headphone jack. And the MacBook Pro missed me so badly that I bought a machine made by Microsoft instead.

The problem, however, is that I’m locked into the Apple ecosystem. All of the machines in my office (other than the Surface Book) are iMacs. My wife’s computer in the house is an iMac. All of my kids have iPads. All of my TV’s are connected to Apple TVs. All of my music was bought through iTunes. All of the movies we’ve bought as a family were bought through the same. My life is seemingly surrounded by Apple and, in a way, I feel like I’m imprisoned by it all.

But maybe there’s a way out? Maybe with a spoon and a whole lot of time, I can tunnel out of this lockdown and find some freedom? The spoon I chose is a Samsung Note 8.

For those not in the know, the Note 8 is the follow up to the phone that damned near broke Samsung by way of exploding batteries and lawsuits. I chose it for a few different reasons:

So I got the phone this past Friday. I bought it through AT&T and added a line to my family plan for testing purposes. The idea here is that I have two weeks (acceptable return time by AT&T) to test the thing and if at the end of that two weeks I think the Note 8 is the answer, I will cancel that new line and replace my iPhone with the Android as my new daily driver.

I plan to do this evaluation using four chapters of journals:

So obviously, you are reading the chapter that covers my intro and initial hardware impressions. I figured the hardware was a good place to start since as an Apple guy, I am predisposed to nicely made tech devices. I can tell you right now that the Note 8 is every bit as impressive from a fit and finish standpoint as any iPhone I’ve owned since the iPhone 4. It’s not quite iPhone 4 good, but it’s pretty damned close.

The Note 8 is essentially a glass slab that is 75mm wide, 163mm tall, and 9mm thick. It is HUGE… But it doesn’t feel in the hand or pocket as ungainly as an iPhone Plus. It’s taller than the Plus, but it’s narrower and that makes it feel more approachable as a pocketable EDC item. 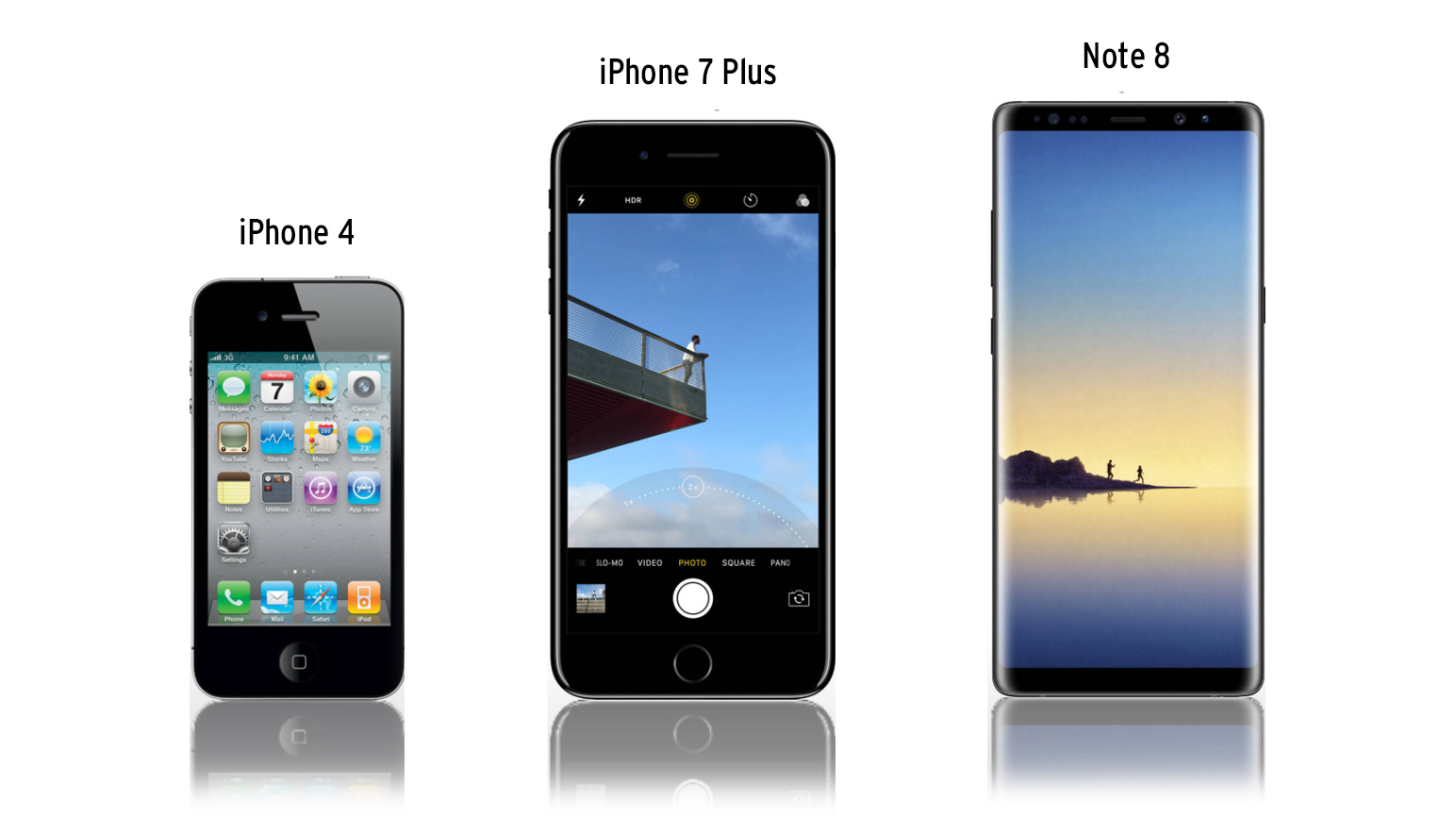 Now keep in my mind that I’m a guy that yearns for the small and slender profile of the iPhone 4. I prefer light pockets. But as soon as I saw the virtually bezel-less screen on the Note 8, all of that kind of dissolved. It is, without doubt, the most beautiful screen I’ve ever laid eyes on. Starting up the Note 8 is a very similar experience to seeing a really good HDTV for the first time. It just blew me away.

The other aspect from a hardware standpoint that truly sets the Note 8 apart is the S-pen. The stylus is tucked away into the body of the phone and is easily reachable with a simple press of the tip. Once out, it changes the way you interact with the phone on a profound level. Fat fingers are no longer a problem and you can address the phone in a manner that’s more similar to the way you address a laptop. It’s just more natural… To me anyway.

And then, there’s the cameras. The Note 8 has three of them. The front facing is an 8MP with an f1.7 lens. I don’t use front facing cameras, so I don’t really give a shit about it… But the two rear facing cameras are special. One is a 12MP wide angle with an f2.4 aperture and the other is a 12MP zoom with an f1.7 aperture. They both feature optical image stabilization and they both perform better than any camera I’ve ever used on a phone. Here’s a quick snap I took with the zoom:

Dynamic range is excellent… and the convenience of having two lenses onboard is really, really great. If you are a mobile photographer and the camera is your number one priority, you won’t find a better phone (right now) on the market for your needs. It’s that good.

It’s not all roses and hot rods though… The Note 8 does have a few shortcomings from a hardware standpoint. First, why in the hell do all of these hardware manufactures keep making glass phones? Maybe it’s the wireless charging requirement? I mean when you mail something made of glass, USPS makes you put a “Fragile” label on the box, right? It just seems to me to be a really poor material choice for a mobile object. I break shit on the regular. And I’m pretty sure I’ll eventually break both the front and back panels on this phone.

Also, who at Samsung was responsible for the finger print sensor on the Note 8 (and S8 for that matter)? It’s located on the back of the phone in an awkward spot that all but guarantees you will smudge your beautiful camera lenses when reaching for it. In my opinion, it’s the single most unforgivable feature of the phone. In fact, it’s so bad that I’ve disabled the fingerprint sensor all together.

Coming in just behind that fault is the speaker. It’s pretty pathetic and you would think a phone that is so setup for multimedia would feature a pretty epic sound system. The Note 8 does not… In fact, the speaker on the Note 8 just comes across as an empty after thought. Of course, that’s not a huge deal but it is one to consider.

In any case, those are my initial impressions of the Note 8. Despite the few short comings, I’m finding it to be a really beautiful piece of engineering. And like I said, the fit and finish is right there with anything Apple has made since the passing of Steve.

Give me a few days to really get to know the OS behind it all and I’ll report back with my findings and thoughts on Android in general.